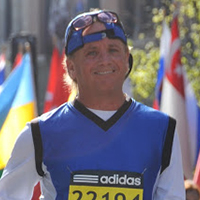 What lifestyle changes have you needed to make?

I have extremely severe asthma and it scarred my lungs; I had to retire from my career as a respiratory therapist at the age of 49 because my lung disease was getting progressively worse and I was spending too much time in the hospital. After I retired, I incorporated exercise and fitness walking into my daily routine and also became an advocate for those suffering from the disease.

Despite being constantly short of breath and out of shape I didn’t want to lie around the house feeling sorry for myself waiting for this disease to kill me. I decided instead to put into practice what I had preached to my chronic lung patients over the years, and that is: exercise, exercise, exercise! As counterintuitive as it sounds, you need to exercise even when you’re short of breath.

With that in mind, I put together a self-directed physical re-conditioning (pulmonary rehabilitation) program that would hopefully help me manage the vicious dyspnea cycle, maintain what little lung function I had left, shed some of the weight I had gained from years of prednisone use and perhaps, just perhaps, beat the odds by living longer and happier than science and medicine says I’m supposed to.

Though I may look totally healthy on the outside, on a good day my lung function is only about a third of normal. I’m pretty much short of breath all the time. Walking a marathon is much harder than it looks, and can be dangerous for someone with lungs like mine, but I’m living proof that it can be done. In fact, I’ve done it eight times now. My doctors still can’t figure out how the heck I can physically do it or, for that matter, why the heck I’d want to in the first place. I do it because it makes me feel good about myself. My lungs might be trashed, but my spirit isn’t. I push on with life despite my breathlessness, though I admit it’s hard to do at times.

At first I tried swimming and running, but they left me instantly winded. By default, I took up good old-fashioned walking. Little did I know what a profound effect this activity would have on my life. When I first started walking for fitness I was in such bad shape I could barely go a few blocks without suffocating; and on many days I was too short of breath to walk at all. Despite the concerns and doubts of some I kept pushing myself to go a little farther each time — and have since walked numerous half and full marathons.

As of 2016, however, due to worsening lung function, increasingly frequent and life-threatening exacerbations, and basically because we've exhausted all other options, my doctors are recommending that I consider a lung transplant.

The conversation actually began back in 2010 with Dr. Sally Wenzel during my participation in the Severe Asthma Research Program (SARP), but at the time I was not interested.

Well, six years and dozens of hospitalizations later, I’ve had a change of heart and have agreed to be formally evaluated for transplant. In July of 2016 I began the actual evaluation process at UCSF medical center in San Francisco. I should receive a final determination about my eligibility in the next couple months when the evaluation is complete.

What makes my case so unique, is that very few people have had to have a lung transplant because of severe asthma. It's practically unheard of — there's simply no precedent.

Hopefully a new treatment will come along and I won’t need a transplant, but in the meantime if I’m accepted into the program, and if things get really bad, they can place me on the organ waiting list (UNOS) without further delay.

What were the steps leading up to your diagnosis?

I was born wheezing and was kind of a sickly child. At first they weren't sure if I had cystic fibrosis or asthma. The official diagnosis of asthma came at the age of six.

What accomplishments are you proud of?

A year after I started walking I walked 13.1 miles in just over three hours, successfully completing my first half marathon. Then just a little over a year after that I did what others said was not possible: I walked 26.2 miles and finished the Portland Marathon! Since then I’ve gone on to finish a dozen other races, including the Rome Marathon in Italy (twice), and on April 20th, 2009 I walked my way into the record books by becoming the first person with documented severe lung disease to finish the Boston marathon! In 2010 and 2011 I finished my second and third consecutive Boston marathons, finishing each race approximately 12 minutes faster than the previous.

Who has been there for you? How?

My partner of 26 years, my friends with severe asthma and my wonderful pulmonologist and asthma researcher Dr. Sally Wenzel, who is pictured with me at the top of this page.

What's your advice to someone else living with asthma?

Know that you are not alone. Exercise regularly and be proactive with trigger avoidance and your treatment plan. Learn as much as you can about this disease and educate others. Find a doctor who truly understands asthma.

My lungs might be trashed, but my spirit isn’t.

I reside in the San Francisco Bay Area and have lived with a very severe form of asthma since birth. I’ve lived a lot longer than people thought I would. My walking story, and the concept for my blog, begins in September of 2004 when my asthma finally impacted my ability to continue working full time. At the age of 49, I was forced to retire from my 29-year career as a respiratory therapist; seems I was spending more time as a patient in the hospital than as an employee in one.