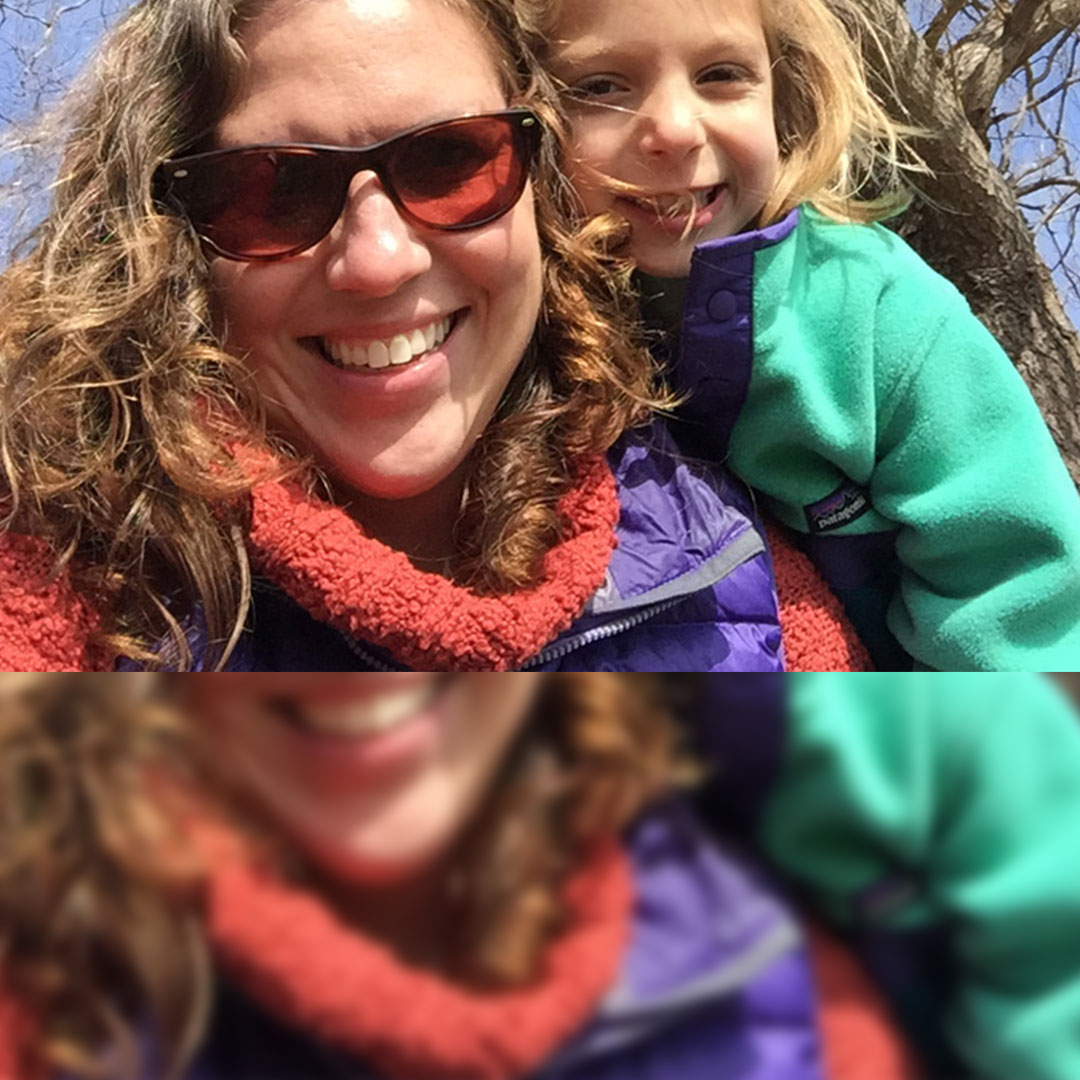 Fact: Moms Clean Air Force has volunteers in all 50 states, plus D.C. and Puerto Rico.

Gretchen Dahlkemper’s daughter Fiona was still a baby when she had her first asthma attack.

“I had never really seen an asthma attack,” Gretchen says.

“She was 10 months old and her lips turned blue and she couldn’t breathe.

“That’s when it became a lifelong passion for me, protecting her and other kids with asthma from the air pollution that exacerbates their health issues.”

Ozone, the gas found in what we call smog, and particle pollution like that found near factories, busy highways and in smoke and dust, make it more difficult for everyone to breathe — but they have a particularly negative impact on asthmatics.

These pollutants can make asthma symptoms like coughing, wheezing and tightness in the chest worse, and are known to trigger attacks. They also make asthmatics more sensitive to indoor triggers like mold and dust mites.

Her daughter’s asthma diagnosis was by no means the first time Gretchen had thought about air pollution and the environment. She was volunteering as a consultant on clean air and renewable energy projects when she was pregnant with Fiona, her second child.

During the pregnancy she had been told, as all pregnant women are, to avoid eating tuna fish because of the risk of mercury poisoning and its impact on the neurological development of her child.

I did not realize that the mercury in the fish came from coal-fired power plants — and I got really, really angry. Why am I being told not to do something because it would have a lifelong impact on my child … but nobody’s made the connection to the source?

Around the same time, she was asked to speak at a press conference on the subject. In her preparations and research she learned what causes the mercury in our fish; the pollution belched from coal-burning factories and power plants settles in bodies of water, where it enters the food chain and fish like tuna consume it.

“I did not realize that the mercury in the fish came from coal-fired power plants — and I got really, really angry,” Gretchen says.

“Why am I being told not to do something because it would have a lifelong impact on my child … but nobody’s made the connection to the source?”

Dominique was concerned about air pollution and climate change, but was finding it a struggle to relate to most of the literature on the subject.

What does success look like for Moms Clean Air Force?

Moms Clean Air Force is now a special project of the Environmental Defense Fund with chapters in 19 states across the U.S., and volunteers in all 50 states plus D.C. and Puerto Rico.

“The information about climate change was often talking about polar bears and melting ice caps, which are all huge issues but for the average American is not something we are seeing or dealing with on a daily basis,” Gretchen tells NewLifeOutlook.

“As a mother herself, knowing that the health impacts that we’re seeing from climate change were impacting her kids, and that she was probably not the only one concerned as a mother, she started writing as a mother about air pollution.”

Dominique’s writing resonated with Gretchen and with parents across the country, and Moms Clean Air Force rapidly became a community of passionate people dedicated to making the world a better, safer place for their kids.

Moms Clean Air Force is now a special project of the Environmental Defense Fund with chapters in 19 states across the U.S., and volunteers in all 50 states plus D.C. and Puerto Rico.

The organization hopes to see the U.S. move as quickly as possible towards renewable energy, and shift the economy to create jobs in a way that combats air pollution, instead of adding to it. It encourages parents to take part in “naptime activism” by making it quick and simple to sign relevant petitions and send messages to government agencies as well as access learning resources about air pollution and its causes.

“Today we’re a force of 900,000 moms and dads and grandparents and aunts and uncles, united around clearing the air pollution that is making our kids sick and at the same time causing climate change,” says Gretchen, who is now national field director at Moms Clean Air Force.

“We’re trying to create this global movement of parents who are concerned about their children.”

Parents are “uniquely positioned to talk about leaving behind a better place,” making them a powerful force for change, Gretchen says.

“We can help cut through those political barriers that are so often present. We don’t go in as scientists, lobbyists, physicians — we go in as parents. It opens up doors and it opens up lines of communication that maybe wouldn’t be open to us otherwise.”

“We’re trying to create this global movement of parents who are concerned about their children.”

“Becoming a parent changes you. It’s no longer about yourself and you really have to think about every action that you take and how it’s going to impact your children.

“I also think there is this sense of optimism that comes from being a parent; to bring a life into the world who’s going to be here for decades and decades means that you’re expecting the world to be healthy and safe for them.”

Gretchen is optimistic that Moms Clean Air Force will see its goals become a reality, “because I think that the public is behind it.”

When baby Fiona was diagnosed with asthma, Gretchen’s family moved to be further away from the highway — but having the option to do this is a privilege many people don’t have.

“Asthma impacts the poorest among us, and especially communities of color and children of color,” Gretchen says.

According to the Centers for Disease Control, almost 16 percent of black children have an asthma diagnosis, compared to about half that percentage of white children. And more than 12 percent of children living below the poverty line are diagnosed with the disease — a figure that shrinks as family income increases.

How can parents make a difference?

I think so many of the problems in the world, and especially here in the U.S., could be fixed if people just start talking to their elected officials again. People have forgotten that they can pick up the phone and call their mayor, or they can go into the office of their congressman and tell them how they feel about an issue. For our kids to see us being citizens, and being active participants in democracy and government, I think is really important and will create a generation of people who feel like they have a voice in politics and government. 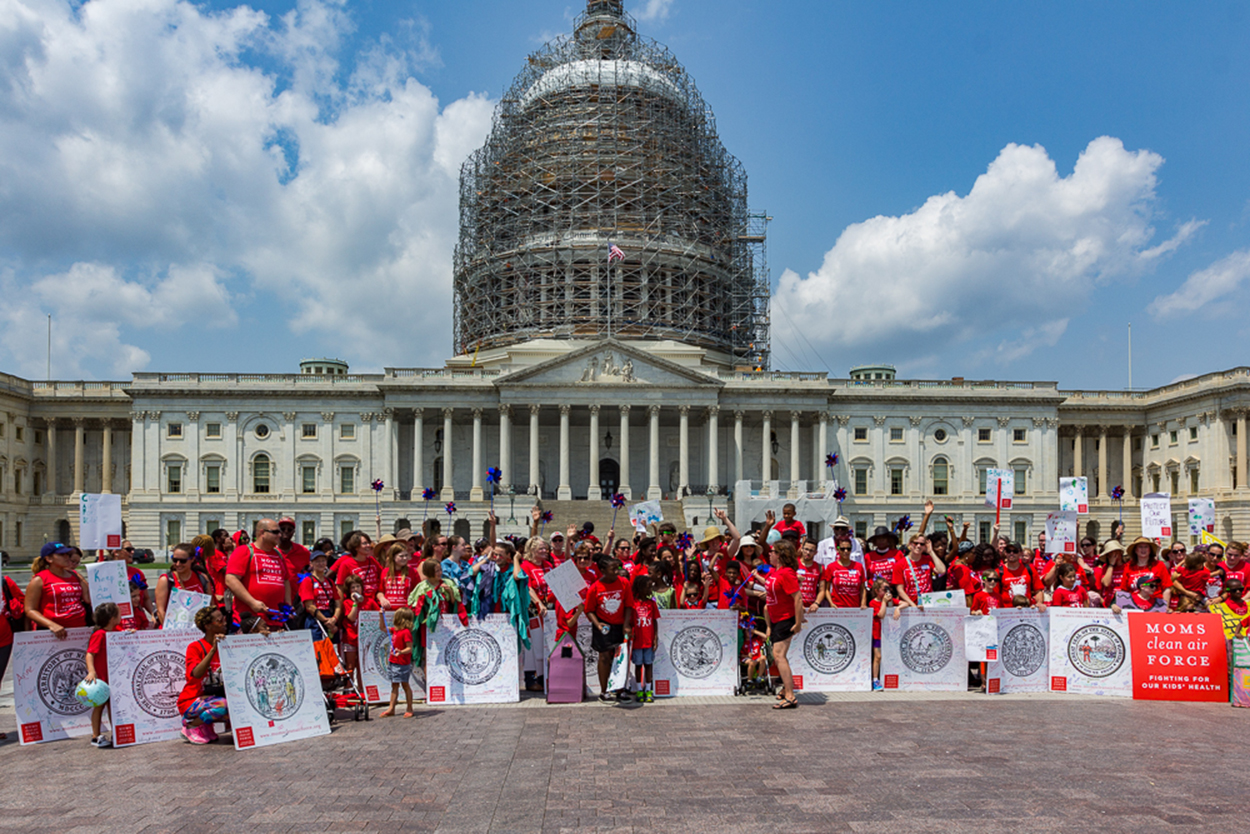 The connection between poverty, ethnicity and asthma isn’t entirely clear, but medical experts suggest it is a combination of things. The poor and minorities are more likely to live near industrial sites, heavy traffic, and in substandard housing — perfect conditions for asthma to develop and thrive.

And while cleaning up the air to improve the health of these children is a cause you would think everybody could get behind, Gretchen says there are a couple of reasons why it’s not. First of all, you can’t see all air pollution.

“We hear a lot, ‘The air is a lot cleaner than it was when I was a kid.’ And that’s true, and it proves that good policy works...”

“We hear a lot, ‘The air is a lot cleaner than it was when I was a kid.’ And that’s true, and it proves that good policy works,” she says.

“But what we have not yet addressed is the air pollution that you can’t always see, which is also some of the most dangerous.”

The second reason Gretchen suggests not everybody is on board with clean air initiatives is that “people are scared” — of a loss of jobs in the industries causing pollution, and as a result harm to the economy.

“I would say that most people want to see clean air, clean water, and want their families to be healthy, but the fear-mongering of the other side holds a lot of power within government.”

What Can I Do?

Gretchen encourages parents of asthmatic children to learn about how to use any prescribed medication most effectively, and about what triggers their child’s asthma attacks. Indoor and outdoor air quality are two of the main culprits.

“Arming yourself with the information and then sharing that information I think has ripple effects.”

She also recommends talking to your doctor, your child’s teacher and school, and your elected officials, to pass on what you’ve learned and make sure they’re aware of your concerns.

“Arming yourself with the information and then sharing that information I think has ripple effects,” she says.

In talking to children about these issues, she says it’s important to keep it positive and optimistic.

“We do think it’s important to be talking to the next generation but we try to really do it in a way that is respectful of who they are, being a child.”

It also provides resources to learn more about air pollution, climate change, and other environmental issues.

Sign up to be a Moms Clean Air Force member here.

When you have a chronic illness, feeling like you’re part of a community and knowing that you’re not alone in your day-to-day struggles is important.

Some voices in this community stand out as pillars of strength, always there to listen and offer words of understanding and encouragement. Their realistic but positive outlook has a way of empowering others.

NewLifeOutlook’s Community Voices project is our way of recognizing these people — and we need your help to do it.

If there’s a blogger, a tweeter, a YouTuber, a Facebook group creator or a forum moderator who inspires you to persevere in the face of chronic pain, fatigue and brain fog, we want to know about it — nominate them by contacting info@newlifeoutlook.com